Genealogy and history pertaining to the state of Florida.

The Delegates To The Saint Joseph Constitutional Convention 1838-1939

The information about the delegates is arranged as follows: 1. Raw biographical data, arranged in the same fashion for every delegate. This will allow exhibit organizers and text writers the opportunity to make comparisons about the fifty-six delegates. 2. A biographical essay, which utilizes the information from (1) in an essay about each delegate. The essays are of different lengths and of different types, depending upon the information available (and its trustworthiness) about the delegate in question. 3. A research comment and the notes for (1) and (2), above. The comment will afford...
View More...

Condition: As New, a sticker on inside of cover

Free shipping media mail, 47 pages, index 5 pages, Peopling the "pine barrens or sandy desarts' became a critical need of Britain after its acquisition of the two Florida provinces at the end of the French and Indian War.
View More...

By: Bureau of Historic Sites and Properties Division of Archives, History, and Records Management Department of State

The following represents the result of a project undertaken by the Division of Archives, History and Records Management at the request of the Division of Recreation and Parks, Department of Natural Research. The purpose of the project was to assemble as much biographical information as possible about each of the fifty six delegates to the constitutional convention held in the city of Saint Joseph in 1838-39. The information thus assembled would be used by the Division of Recreation and Parks in its re-interpretation of the Constitution State Museum at Port Saint Joe. 386 pages. Names includ...
View More...

National Genealogical Society's Research in the states series had its genesis in the NGS Quarterly with the publication of "Master Plan for North Carolina Research" in 1987. The Quarterly continued to publish state guides and NGS later issued many of them as special publications. The 2008 releases include both revised editions of earlier guides and some new states. Additional states will be added to the series on an ongoing basis. In keeping with today's electronic age, they will all be electronic publications.
View More...

"Census" Department of the South November, 1864 For Jacksonville, Fernandina and St. Augustine, Florida

One of the forgotten legacies of the Civil War was a special census of eastern Florida conducted on the orders of Federal military authorities. Its motivation is to this day unclear, but it seems likely to have been done to help register voters. African-Americans living in the region were also enumerated despite the fact they did not yet have the legal right to vote. The number, age, and gender of these "contrabands" would of great interest to Union military men who were always on the lookout for new recruits for the growing number of United States Colored Troops regiments being formed. Thus, ...
View More... 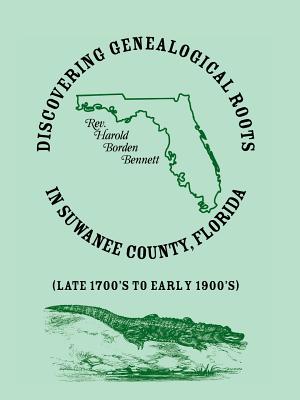 The book begins with a chapter discussing some basic information regarding genealogical research, and is followed by a chapter containing a general history of Suwanee County, a timeline of important events, and biographical sketches of many settlers. In the next eight chapters, the author transcribes data from a variety of records containing valuable genealogical information, including land grants; voter lists; wills; probate records; military and pension records; marriage records; tax lists; and court cases. Yet another chapter covers area cemeteries and burials of residents born before 1850....
View More...

Information on this state is available from many other sources.Histories and geographies abound; there are place-name books, guidebooks and biographical references; many excellent atlases provide map detail; government registers contain in-depth coverage of the political organization. It is the existence of so many varied sources of information that makes a systematic, encyclopedic reference necessary - a single source for the most useful information about Florida. A secondary purpose of this volume is to play a part in the national reference on all of the states, a systematic approach to refe...
View More...

This hefty publication contains Florida land claims submitted to the United States Government in 1825 for: 1. Gratuitous Concessions: Grants made upon condition that the grantee would clear and cultivate a portion of land within three years 2. Sales: Lands in Florida sold at auction by the Spanish Royal Treasury on November 22, 1806 3. Cases of Compromise: Claims made on the contention that individuals had occupied lands for more than ten years and were permitted to obtain titles. Each entree contains the Full-Text of each claim - usually written by the claimant, his agent, or an i...
View More...

By: William A. and Janet B. Wolfe

It is the hope and desire of the compilers of this index that it be of value to both the professional and amateur genealogists tracing the lineages of Florida Pioneers. Session Laws: The name commonly given to the body of laws enacted by a state legislature at one of its annual or biennial sessions. So called to distinguish them from the "compiled laws" or "revised statutes" of the State. The Legislative Council of the Territory of Florida convened in sessions from 1822 to the beginning of statehood in 1845. The Acts of those sessions were published in a separate volume for each year. Wh...
View More...

Name Lists are a key to success in any genealogical endeavor. Name lists, be they national, state, county, or even city or town in scope, can help nail down the precise place where one's ancestor may have lived. And if that can be done, further records, usually found on a local level, will now be accessible to research. But success depends on knowing where the ancestor resided. This is the where Dollarhide's Name Lists guides can make the difference.
View More...

In this Second Edition, William Dollarhide identifies Census Substitutes, as well as State Census Records for the Eastern portion of the United States of America. The substitutes are those name lists derived from tax lists, directories, military lists, land ownership maps, voter registrations, and other compilations of names of residents for an entire state, one or more counties of a state or one or more towns in a county. Thirty-seven states conducted colonial territorial, or state censuses that are extant and available for research today. Often taken between Federal Decennial Census years, t...
View More...